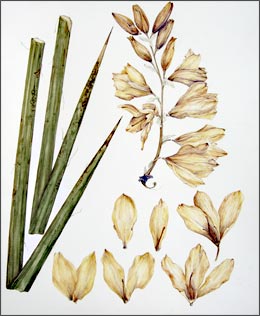 This juried exhibition showcased Arizona's native plants during the celebration of the state's centennial year (2012) and coincided with the Tempe Center for the Arts Arizona Centennial Celebration.

Thirty-six native plants of Arizona, some indigenous to the Grand Canyon region only, were shown in the exhibit. Eighteen botanical artists from around Arizona participated in the exhibit.

Best in Show was awared to Margaret Pope for her colored pencil drawing of the Queen of the Night Cactus, Peniocereus greggii.
Best in Wet Medium was awarded to Gillian Rice's watercolor of the Claret Cup Cactus, Echinocereus coccineus.
Best in Dry Medium was awarded to Elaine Hultgren's pen and ink drawing of Sentry Milk-vetch, Astragalus cremnophylax var. cremnophylax.

Artwork from the exhibit can be seen in this gallery.