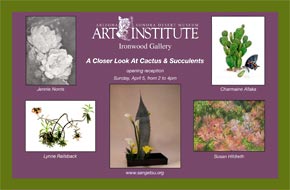 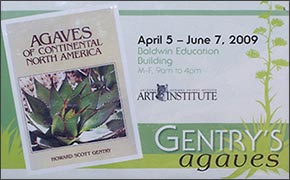 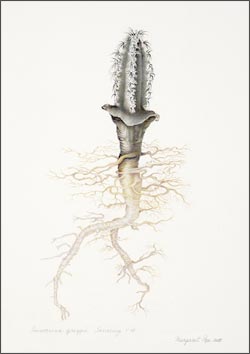 On display at the Arizona-Sonora Desert Museum (ASDM) during the convention in Tucson was Illustrations from Howard Scott Gentry’s Agaves of Continental North America. David Yetman, writer, research social scientist, well-known host of the public television series The Desert Speaks, and friend of Howard Scott Gentry, spoke at an opening reception for the public on Sunday, April 5, 2009. Members of Dr. Gentry’s family were present for David Yetman’s talk and were introduced to the public.

Another exhibit on display at ASDM was A Closer Look at Cactus & Succulents. Also featured at this exhibit were Japanese ikebana flower arrangements using Sonoran Desert plants. The arrangements were created by the Tucson chapter of the Sangetsu School of Flower Arranging. CSSA convention participants were encouraged to visit the museum.

Tohono Chul Park also presented an exhibit during the CSSA Convention in this cooperative effort to share the uniqueness of the flora of our region with visitors.  Prickly Portraits: Cacti and Succulents in Art featured 12 artists' explorations of the symmetry, surfaces, silhouettes, and spaces of cacti and succulents.

The locations and dates for these exhibits were as follows:

Illustrations from the Gentry exhibit can be seen in this gallery.