Storage conditions for illustrations prior to preservation project

Current storage conditions for the illustrations 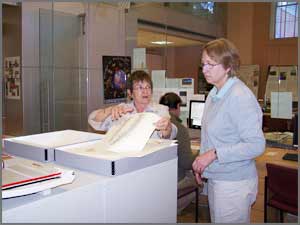 Carol Starr and Chris Bondante prepare to scan illustrations that have been accessioned and transferred to archival storage boxes.

Paulus Roetter
Opuntia bigelovii
Steel engraving from graphite drawing Report of Explorations for a Railway Route Near the 35th Parallel of North Latitude from the Mississippi River to the Pacific Ocean, 1856
Image use courtesy of www.cactuspro.com/biblio/

The Florilegium Program’s most significant undertaking has been its ongoing effort to preserve the botanical art in the University of Arizona Herbarium’s illustrations collection. In 2008 Florilegium volunteers began cataloging the roughly 1,300 pen-and-ink drawings that were being stored in cardboard boxes and file folders. Over time these non-archival storage conditions can cause deterioration of the drawings, and indeed, a small number of illustrations showed signs of damage. The entire collection has now been catalogued, enclosed in archival material, and stored in new custom cabinets at the Herbarium, and the process of creating a digital archive of the works is nearly complete.

Recently, a similar preservation project has been progressing at the U.S. National Herbarium (see The Plant Press). Alice Tangerini, staff illustrator in the Department of Botany at the National Museum of Natural History, found that the Herbarium had in its collection most of the original pencil drawings that Paulus Roetter prepared for the Pacific Railroad Report (Vol. IV, 1856). These delicate graphite drawings were being stored with the original cactus specimens from the survey expedition, and as a result the images had become very faint from age and abrasion.

While physical restoration of the drawings wasn’t possible, they have been digitally rescued. In 2013, the staff at the National Herbarium began scanning the drawings and devising techniques to restore the quality of the linework. Eventually these restored drawings will be available online through the Botany Department’s Historical Collections project. Anyone who has seen the magnificent engravings that were prepared from Roetter’s drawings for the Pacific Railroad Report and the U.S.-Mexican Boundary Survey will be very eager to see these restored drawings.

You can read more here about Paulus Roetter and his contributions to the mid-19th century exploratory expeditions.

This appeared in the April 2014 issue of the Desert Breeze, the monthly newsletter of the Tucson Cactus and Succulent Society.