All artwork is copyrighted
by the artist. 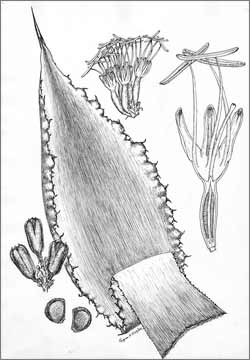 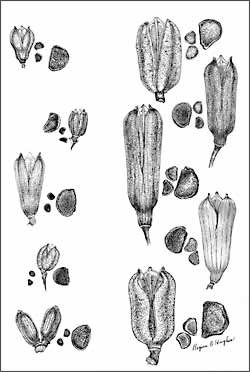 From an early age, Regina Hughes had an interest in drawing and nature, and her parents encouraged her talent with private art lessons. At the age of ten, she began to lose her hearing and was deaf by age fourteen. After attending art school in Omaha, Nebraska, she chose to attend Gallaudet College for the Deaf in Washington, D.C., where she studied the arts and languages.

After completing a master's degree in 1920, Hughes found her first job working as a translator at the U.S. Department of State. Her most prestigious assignment was working on the Conference on Limitation of Armament following the end of World War I.

In 1930, Hughes began a long career with the U.S. Department of Agriculture, first working as a research clerk and then as a botanical illustrator. She had no formal botanical training but worked diligently to acquire knowledge that would help her better illustrate her subjects. Hughes retired from the USDA in 1969 and became a free-lance illustrator, working primarily for the Smithsonian Institution’s Department of Botany, usually without benefit of salary.

Hughes created an impressive legacy of botanical illustrations over the course of a long career. Her orchid paintings have been exhibited at the Smithsonian Natural History Museum and at Gallaudet College. Publications containing her pen-and- ink illustrations are numerous: Common Weeds of the United States (1971), the drawings for which were prepared from dried herbarium specimens; Flora of Ecuador; Flora del Uruguay IV: Bromeliaceae; Agaves of Continental North America; and many issues of the USDA Technical Bulletin. For one notable USDA publication, Economically Important Foreign Weeds: Potential Problems in the United States, she contributed some six thousand drawings and wrote the descriptions of the plants.

During her career, she received several awards, including an honorary Doctor of Humane Letters degree from Gallaudet University in 1967, and 1980 “Artist of the Year” by the National League of American Pen Women. She is commemorated by having two plants named in her honor: Billbergia reginae, a new species of bromeliad that she illustrated for the Smithsonian Institution, and Hughesia reginae, a plant native to Peru.

At age 92, Regina Hughes told the Omaha World-Herald, “I don’t believe in retirement. I hope to die with a brush in my hand.” She died at her home in Washington, D.C., at the age of 98.

Several of Hughes's pen-and-ink drawings from Howard Scott Gentry's Agaves of Continental North America can be seen in this gallery.

Additional works by Regina Hughes can be viewed at the Smithsonian National Museum of Natural History's Catalog of Botanical Illustrations.